What The Pollsters Aren’t Telling You

Polls do influence elections. That’s why people like Nate Silver and some of the writers at Business Insider are doing somersaults over Gallup’s Daily Presidential Tracking numbers. 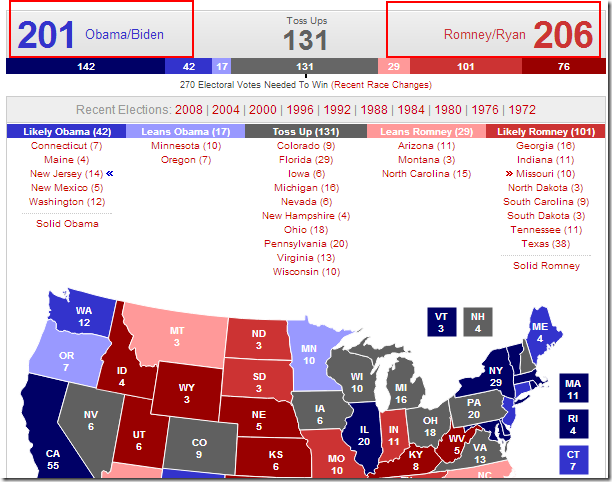 For over a week, Gallup has shown a tidal wave for support for Mitt Romney. Nate Silver of FiveThirtyEight tried to discredit Gallup by blogging about outlier results it’s shown in past years. Here’s the conclusion Business Insider reached:

Bottom line: Gallup swings wildly and it frequently has results not in line with other pollsters.
Read more: https://www.businessinsider.com/nate-silver-on-the-gallup-poll-showing-huge-lead-for-mitt-romney-2012-10#ixzz29yPJ4rHE

Instead, Gallup is showing a consistent move toward Romney ever since the first debate. For example, over the past four days, Romney has led by 6, 7, 6, and 7 points. Before that, he move from 4 points to 6 points over the course of four days.

True, Rasmussen and WSJ/MSLSD show Romney and Obama tied. But that’s not enough to toss out Gallup the way Silver and BI attempt.

Now the reason polls matter is because low-information voters tend to break toward the candidate they think will win. If Romney’s cavernous 7-point lead holds steady, those late deciders will break for Romney. That could result in a landslide.

Combine all this with the latest RCP Electoral Map showing Romney up by 5 in the electoral vote count, and you can understand why liberals will say anything to discredit the polls.

Is the Romney Campaign Serious About Winning?

The Romney Campaign today reminded me of the McCain Campaign of 2008. I’m pretty good at ignoring bogus, fraudulent polls like the one CNN released tonight. In that poll, CNN announced a massive 52-46 national lead for Obama. If true, the race would be all but over. CNN, of course, cooked the books on this one. About one-third of voters describe themselves as independents, CNN sampled only 3% independents for its latest poll.

Part 2 of 3 | Read Part 1 | Read Part 3 What is Todd’s real crime? He’s a damaged candidate, sure, but he is not a damaged man. He was wrong, but** he erred on the side of life**. It says something about a society and political mood where a man can be disqualified for loving life and God, but another man celebrated for enabling the slaughter of living children with surgical scissors through the base of their skulls.