Now that Boehner’s “Plan B” strategy has blown up like a poisoned dog, here’s what Boehner will do.

Remember this chart from last month? It shows strategic options from John Boehner’s point of view: 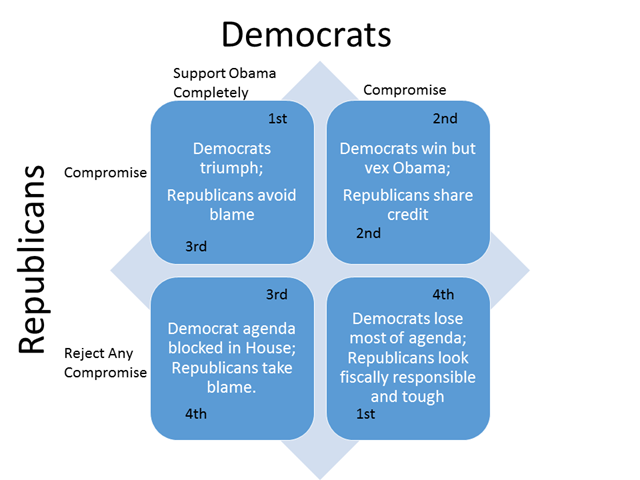 Yesterday, Boehner tried to land about halfway between the top and bottom quadrant on the left, shown here

Now that Plan B has been rejected, Boehner’s choices are limited to these: * Adjourn and hit the fiscal cliff * Cut a deal that will earn most Democrat votes and enough Republican votes to pass

My guess is that Boehner feels betrayed by the 40 or so Republicans who refused to vote for Plan B. In reality, he brought it upon himself by purging the committees of fiscal conservatives. (Anyone who thinks some of this isn’t payback is deluding himself.)

Further, Boehner knows that if he can’t get enough GOP votes to pass an extension of Bush tax cuts on everyone making less than $1 million, he has no chance of getting more Republicans vote for a bigger compromise.

Therefore, the only way the House can pass a fiscal cliff bill is to win a bunch of Democrat votes. Since Democrats know this, they can hold out for whatever Obama demands. Boehner, who doesn’t want to get blamed for failing to reach a deal, will go along and he’ll bring enough Republicans to pass it.

That means Obama gets pretty much whatever he wants. That’s my prediction.

Boehner could also reach a deal with 40 or so Democrats by moving the extension down to $400,000 from $1 million. From a purely strategic point of view, Democrats would be foolish to make that deal. It would undermine Obama and give Republicans their second-best outcome. (Remember, by second-best, I’m speaking strategically. I’m not saying a compromise is the second-best policy outcome.)

With most of the Blue Dog Democrats gone, I don’t see Boehner picking up enough Democrat votes. They know they can dictate the terms, and they probably will.

Sure, Boehner could join the conservatives and pass a bill that permanently extends the Bush tax cuts completely. The Senate will ignore it, we’ll hit fiscal cliff, and the next Congress will deal with it. This would be the best policy choice, but, in Boehner’s mind, it would be the worst possible strategic move. (Again, I’m saying Boehner’s right, but I think this is how he sees it.) Plus, having been humiliated by conservatives on Plan B, Boehner is unlikely to join them now.

Now, go read Erick Erickson’s excellent explanation of why Boehner’s thinking is wrong. (I disagree with only one point of Erick’s. He thinks Boehner and the GOP will let us hit the fiscal cliff; I do not, as explained above.) Following Erick’s lead, here’s the best policy outcome:

P.S. Please don’t scream at me that I’m pulling for a compromise or I want Obama’s $1.6 trillion tax hike to pass. If you’re tempted to do so, read this entire piece again carefully.

The GOP didn’t really have a plan in place in case it lost. It certainly didn’t have a plan for getting snotclobbered. And if you try to spin Tuesday’s results as anything less than a good old-fashioned ass-kicking, you’re deluding yourself. **Republicans Got Creamed ** I know Michelle Malkin found 20 things that went right on election night, but there about 60 million things that went wrong. Let’s take a look:

If We Don’t Flip Some Toss-Up States, Romney, Ryan, and the USA Are Screwed

Choosing Paul Ryan as his running mate was a great Romney move. Looking ahead, Romney sees movement conservatives working hard right up to the election—even if he or his advisors continues to say stupid things. That was necessary. SCROLL DOWN FOR TWO IMPORTANT EVENTS THIS WEEK But it wasn’t enough to win the election and unseat America’s first anti-American president. To do that, we must find a way to win over the selfish middle.

5 Things to Question About Debt Deal

Yes, the Tea Party movement influenced what went on in Washington. No, the Tea Party is not the winner. (No one won.) No, this debt deal won’t guide the government off the road toward bankruptcy. Here’s why. No Entitlement Fix: In fact, it appears that entitlements aren’t touched. Entitlements are the nation’s spending problem. Not roads and bridges, not the military. Entitlements. Until we arrest and reverse growth in Social Security, Medicare, and Medicaid, we’re spitting in the ocean.